Is a Raw Diet Right For Your Puppy?

With hundreds of brands to choose from and different options for wet puppy food and dry puppy food, finding the best puppy food for your young and budding canine companion may seem like an impossible task at first.

But what if we told you there’s a solution to feeding your puppy that does away with all the brand names altogether? What if there was a diet your puppy could follow that not only improves its overall health but also has been tried and tested for thousands of years? Sounds too good to be true, right?

Well, as it turns out, that’s exactly what the raw diet is.

Here, we’ll discuss the proven benefits of the raw puppy diet and dispel some of its common myths. By doing so, we’ll help you determine if the raw diet is right for your puppy or not. 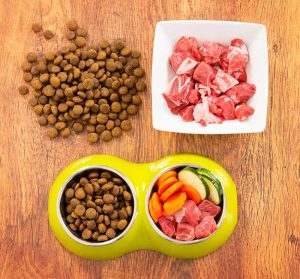 What Is The Raw Puppy Food Diet?

The modern raw puppy diet has its roots in the Bones And Raw Food (BARF) diet, first made popular by pet nutritionist and clinical researcher Dr. Ian Billinghurst. Originally, this diet prioritized feeding dogs only bones and raw meat.

Nowadays, the BARF diet has changed from “Bones and Raw Food” to “Biologically Appropriate Raw Foods.” This change reflects pet nutritionists adding some non-meat foods to the list that are appropriate to feed adult dogs and puppies alike.

Another variant of the raw puppy diet is the prey model diet, which argues that the best puppy food consists of meat, bones, and internal organs alone. The idea is to closely mimic the diet that the first dogs would sustain themselves on during hunter-gatherer times.

The best puppy food diet for raw feeding incorporates a mixture of both approaches.

Why You Should Consider The Raw Puppy Diet

At first glance, the raw puppy food diet may seem unsanitary and dangerous for your young canine friend. However, there are several benefits to the raw puppy diet that can help make any puppy healthy and happy.

Here are some major reasons why you should consider feeding your puppy BARF:

The reason for a majority of these benefits is that raw foods are more nutritionally dense than traditional dry and wet puppy food.

Better bone structure and muscle growth can lead to a healthier body for your dog. At the same time, higher energy levels and improved brain development mean your puppy will be easier to train. A healthier gut biome can also fix your puppy throwing up food, a common concern for pet parents when replacing a puppy’s diet or weaning it off.

What Does The Raw Puppy Diet Include?

There are two variants of the raw puppy diet: BARF and the prey model diet. What raw food you feed your puppy depends largely on which diet you follow. Here, we’ll briefly go through both and provide a list of foods that they can include.

The BARF puppy diet is all about versatility; it includes various other raw food sources in addition to raw meat and bones. The idea is to optimize on micronutrients that puppies need in trace amounts, which may otherwise be difficult to acquire from meat and bone alone.

A typical BARF diet consists of the following split:

For puppies, especially those freshly weaning off, try sticking mostly to raw meat, bone, and offal. Nuts, grains, and fruit should only be introduced once the puppy has adjusted well to the raw meat and bone.

Don’t worry about not providing your puppy with enough vitamins and other micronutrients without feeding it fruit, nuts, and vegetables; raw meat alone should provide adequate water-soluble vitamins to your puppy.

On the other side of the coin, we have the prey model raw puppy diet. Rather than being versatile, the prey model diet is more specific and more closely mimics the evolutionary conditions of puppies as they evolved from wolves.

The idea is to feed the puppy the same food as a predator would have gotten from a wild prey animal growing up. Although we can no longer simulate the same conditions of the hunter-gatherer era, it’s still possible to feed puppies as close a replication as possible of the original predator diet.

Here is a breakdown of a typical prey model raw puppy diet:

Additionally, a trace amount of raw, leafy greens is optional for your puppy to mimic the grasses found in the stomachs of wild prey animals. You can also optionally supplement with fish oil to provide your puppy with omega-3 fatty acids.

The prey model raw diet typically includes whole animals, including chickens, fish, quails, rabbits, and game birds. To adapt this for puppies, especially those who have just weaned off, we recommend first chopping up the full animal into smaller pieces and gradually introducing the puppy to whole animals to help it adapt.

When Can I Feed My Puppy The Raw Diet?

It doesn’t matter whether you have the best puppy food on the planet or not; if your puppy isn’t ready to transition its diet, you’re bound to run into problems.

So what’s the best time to start your puppy on a raw diet?

Ideally, you should introduce your puppy to raw foods when they are done completely weaning off mother’s milk. This is usually when the puppy is between eight and twelve weeks old. Introducing a raw diet earlier is not recommended as the puppy’s immune system is still developing.

What If My Puppy Is Already Eating Cooked Dog Food?

The best puppy food isn’t necessarily the most expensive one on the market. If your puppy is already eating a processed food diet with a brand such as Royal Canin puppy food or Diamond puppy food, your best bet is to slowly transition from a processed to a raw food diet. Otherwise, you may risk your puppy throwing up food or simply refusing to eat.

We recommend you gradually transition your puppy from processed food to raw food. The process can take anywhere from one to four weeks, depending on your puppy’s health and eating habits.

Start by giving your puppy three-fourths processed food and one-fourth raw food. Check on your puppy when it passes stool; if no diarrhea persists, continue with the diet. Gradually increase the amount of raw food every three to four days until your puppy can finally eat raw food alone.

While some may argue that the raw puppy diet is the best puppy food on the planet, it’s not without its risks.

Here are some things to consider when starting out the raw puppy diet:

Raw chicken may contain Salmonella, and raw beef may contain E. Coli bacteria. Both bacteria can cause severe sickness in humans.

However, these bacteria are ultimately more harmful to humans than they are to dogs. So, avoid washing raw meat and store raw meat separately from cooked food to prevent cross-contamination and sickness.

Improperly prepared raw meat cuts can cause tiny, sharp bone fragments to lodge in a puppy’s gastrointestinal tract. These bone fragments can also cause a tooth fracture.

To avoid any health complications, be careful giving your puppy raw bone or meat pieces with these tiny fragments present.

Regardless of whether you go with the BARF or the prey model raw puppy diet, not properly balancing ratios can cause nutritional deficiencies in your puppy. For instance, too much raw bone without sufficient raw meat can cause protein deficiencies and lead to stunted growth.

Stick to a well-known raw puppy diet ratio and plan to prevent such scenarios.

Although the verdict is still out on what’s the best puppy food on the market, the raw puppy diet is a serious contender for the best diet to feed your puppy.

Rather than getting entangled in the dry versus wet puppy food debate, you can simply opt to switch your puppy either to BARF or the prey model raw puppy diet. Doing so can have several physical and mental benefits for your puppy.

Finally, be aware of some of the potential risks that the raw puppy diet carries.

Once you transition your puppy to the raw diet, it’s certain to grow into a happy and healthy dog in no time!